In our last post we showed a very visual concept of duality. We illustrated the similarities between the placements of the Pyramids on the ground with the stars of Orion’s belt in the sky. Also, illustrated in their burial practices, was their belief of life being almost the same in the afterlife as on Earth. Now we look more deeply into their advancement as a civilization by the time of the Pyramids. We have mentioned, if we allow for the mainstream experts to be wholly accurate not only did the ancient Egyptians become some of the finest master builders within 500 years of the birth of their civilization, they also became the most advanced mathematicians and astronomers as well. Their knowledge would rival ours today even with our super computers. Still think it is possible for man to do all that in 500 years? Well let’s explore some figures and equations and concepts.

The Giza plateau was not chosen cause it was a lovely flat open plain suitable for enormous building projects it wasn’t. However, its location seems to have been very specific. Math is considered the universal language, it is thought that no mater where one originates in the universe the rules and laws and language of math remain the same. I would hold that in general that concept is accurate, but there is still the challenge of writing an equation using Roman numerals or Arabic numbers and it being instantly understood by one whom knows neither writing style. That being said one way around that would be to show equations in a manner that ALL would arrive at the same answer regardless of their writing method. What exactly am I saying? Well lets use the Pyramids as an example, an illustrated example:

The bases of the Pyramids are aligned almost perfectly to their cardinal points, with deviation of less than 3 arc minutes. The plateau is located less than 29 seconds from ‘astronomical’ latitude 30 degrees, which is one-third the distance from the Equator to the North Pole. The original height of the Great Pyramid bears the same relationship to its base perimeter as any circle’s circumference to its radius; 2 pi. Another astonishing figure is the ratio of the dimensions of the Pyramid to the dimensions of the earth; the scale is 1:43,200. Ex: h=481.3949 ; p=3023.16 ….. h43,200=3938.685 (within 11 miles of polar radius) p43,200=24734.94 (within 170 miles of true equatorial circumference or less than 0.75% error)

There is also the location of the Pyramids in relation to the world’s habitable landmass, it is the center point. The corners are not more than a 3 minute 33 second deviation from 90 degrees. The sides are not more than 10.49 inches in length variation.  The Causeway of the Great Pyramid runs 14 degrees to the north and the Causeway of the second Pyramid runs 14 degrees to the south. The last number I will throw out for you this time is that the corridors of the Great Pyramid are set on 26 degree slopes, all of them, except for the ‘well shaft’, which is vertical and the ‘ventilation’ shafts which are their own enigma. 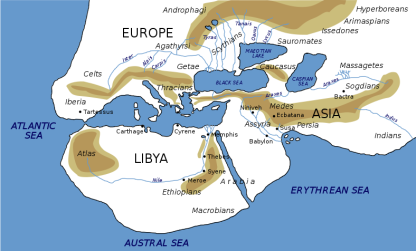 Now lets ponder all this new information in relation to the ‘known facts’ according to the Egyptologists. The society while it was advanced stayed within the confines of the northeast of the African continent and interacted with peoples that were located in the area now referred to as the Middle East, it is also thought that Egypt was aware of and dealt with the contemporary cultures of the Mediterranean Sea. In their time that is considered the extent of the ‘known world’. However, as we have shown above in our numbers, the builders of these tombs of pharaohs, were aware of the size of the earth precisely as well as their relation to the whole of the world. If the Egyptians were the first civilization and had only become ‘civilized’ 500 years before the building of the Pyramids, are we also to assume that in the tiny 500 year span they also managed to explore and measure and document at least in numbers, the whole world? The credit for circumnavigation is currently given to Magellan millennia later. If it took Europeans building off the knowledge of prior cultures over 1500 years to achieve circumnavigation then how can the experts not ponder the 500 year old Egyptian culture’s knowledge of the same information?

The number system that appears to be used in the building of the structures, as well as, the lay out of the whole of the Necropolis is base 60. Base 60 is such an ancient number system that its true origins are not known, even today.

The size of the blocks used in the buildings are of such a size that even today most engineers would prefer to deny the contract than to try to overcome the obstacles of construction, even with modern machinery and technology. Yet, the experts claim that basic hand-tools and slave labor created the enduring monuments. We are to assume that they were able to build these massive structures, one of which, contains a natural bedrock mound that was encased within the lower building, using only line of sight and primitive means. According to some of the experts we can throw out the slave labor and say skilled craftsmen, but again with no more than 500 years of knowledge at their back. Others say they had large sawing ‘machines’ but these were almost as much construction as the structures. Then also you have the theory that ramps were used to pull the blocks into place, yet there is no mention or description in any text or historical reference nor is there any archaeological remains of these immense ramps that would have again required almost as much building as the structure themselves. How is it that the theories of the experts, which seem to have more holes than a really good swiss cheese, have stood the test of time? Just some more thoughts to ponder until next time.

This site uses Akismet to reduce spam. Learn how your comment data is processed.

New book mail. This is the latest one sent for review. 🙂 Guess where my nose will be for the next few days. 😉
Another book finished!
More #book mail! 😍
I 💗📚📪 #randomthoughtonline #books #booknerd #reading #ancient #history #caveart
So much for finishing my book 🙄
We are getting a brand new look!!! #brandnew #newlook #blogger #podcast #news #politics #history #arts #culture #travel #food #crafts #diy #lifestyle #love #life #self #grow #learn #explore

Random Thought – Yours To Discover